One thing is guaranteed in a discussion about scales. Some people will sing their praises adoringly, whilst others, will categorise them as being amongst the most boring and repetitive tasks that they are obliged to undertake. Many will also find playing scales intensely intimidating, to the extent of causing anxiety, or in extreme circumstances depression. The range of diversity of opinion on scales and their value to us is enormous. The emotions attached to them are invariably opposites. We tend to either love or hate them!

Even though I personally adore playing scales and over the years have become increasingly intoxicated when working on them, as a ‘must do’ section of my regular practice sessions, I do equally appreciate and understand the ‘how?’ and ‘why?’ observations of the opposite view.

In the UK at least and from very early on, scales are presented to us by our teachers as ‘that other thing’ that we have to do, in order to pass music exams. At this stage of our learning and very much at the other end of the sheer fun to be had in those exciting new pieces that we are learning, scales are somewhat lacking in interest. With what appears to be inane repetition, they turn sour on us swiftly and increasingly become almost like a punishment for a particularly bad crime. If we aren’t good children, we will be sent away to a dark room, there to practise our scales until we recognise the error of our ways and learn how to behave properly!

In those initial stages of our development with music and the flute, scales are already getting a very poor press and they end up being the last discipline that we seek to address in our practice sessions. Quite often, they don’t even get a look in and are conveniently brushed under the carpet in the hope that they might just disappear or even vanish altogether. For many, scales can introduce a sense of tedium and heaviness into working with a flute, which is counterproductive and really shouldn’t be there.

When we are required to engage with them, they are played over and over again in exactly the same way, leading to further boredom and often mild irritation. They become a tedious chore, their value being complicated to comprehend. For numerous flute players all over the globe, scales steadily turn into something to detest.

Of course, this is nothing short of a tragedy as we don’t need to possess the finely tuned brains of astrophysicists or surgeons to realise that scales in varying degrees, patterns and styles, are very much a major part of most of the music we play. If we want to perform repertoire convincingly and with control, from Handel, Telemann and Bach, through to Stravinsky, Shostakovich or Messiaen, it makes absolute sense to practise them, making sure that they are ‘under our fingers’.

Perhaps the greatest psychological issue here is about how scales are presented.

Here is an example…when I was at school, I loathed calf’s liver. By the time it arrived on a very unattractive and bland plate on an equally uninteresting industrial looking table, nestled up to a watery mush that had once been an assortment of vegetables, before the school’s chef got his hands on them, the liver had the consistency of a very well-worn and tired old leather shoe sole. In short, there was absolutely nothing of any visual appeal to it, the meat was horribly chewy and with a taste and flavour (what little there was of it) somewhere between revolting and vile.

Visit a half decent Italian restaurant, with crisp linen tablecloths, sparkling cutlery, a waiter or waitress with a glint in their eyes and a glass of Barolo to hand and the same dish couldn’t be more opposite or attractive. When cooked to perfection, calf’s liver can be mouth-wateringly delicious (apologies to any vegetarians, vegans or even teetotallers reading this).

I think that we can probably all agree that in most study or method books, when a chapter on scales turns up, with little in the way of instruction, few or even no illustrations of variety, at least in terms of articulation and even a lack of dynamics, the words bland, uninteresting and dull rapidly spring to mind. Ceaselessly going up and down, working on scales suddenly holds about as much attraction as attacking that ghastly piece of school dining-room liver!

With the Simply Flute Scales System however, we hope that what is on offer within this page of the website might be able to bring about a change of heart to those who struggle with the idea of playing scales as a regular part of their practice. The goal is that living and engaging with scales will gradually become as attractive as eating that moist liver dish in a good Italian restaurant!

As William Cowper said, ‘Variety is the spice of life’ and this couldn’t be more true than when the topic of scale practice is on the agenda.

Normally, we will be instructed to play our scales, commencing from the tonic, rising one or two octaves and then falling back again to the tonic. We will be told to play these patterns with a variety of different articulations and slurs, which rather inconveniently are not individually indicated, as doing so, would necessitate a whole book devoted to nothing but scales…hardly a best seller for a publisher. Invariably, there will be a rough chart of various articulations at the top of the first pass in C major, but the onus will be on the individual to remember which articulation they are using, throughout their practice session. Whilst logical, this is also not helpful, as some of the articulation patterns are close to complicated and unless printed out, attention to detail can suffer, as our brains are being bludgeoned with rather too much information.

Instruction needs to be as clear as possible.

With the Simply Flute Scales System, we are doing exactly that by conveniently placing everything systematically and neatly within one section of the website.

We have taken what I consider to be the best attributes of previous concepts on how to approach scales, written out all of the articulation possibilities, added dynamics and breath marks, along with a few extra twists and turns, as and when appropriate. First on the list is the Altès scale system, with some extensions. Over time, others will be added (such as Gariboldi, Taffanel and Gaubert etc), so that in the end a complete and varied scales resource will be available on the Simply Flute website and all at the click of a few buttons!

So to make matters even more easy, simple and even enjoyable, we will be taking this controversial topic one step closer to being more accessible, by providing much needed change from time to time. Rather than having to pull one book after another off a shelf, or out of a cupboard, a complete range of different systems will be accessible on this page. In other words, everything that you need to explore the fantastic world of scales, is all conveniently under one huge umbrella, on the Simply Flute Scales System page!

As mentioned already and somewhat unusually in this field, we are providing dynamics.

Whilst we are playing these runs of notes, rather than feeling as though a military march is taking place on a cold and drab midwinter afternoon, with the addition of dynamics, shape and a range of diverse characters are implied, further encouraging engagement. Both of these elements are crucial in order to explore and nurture the potential for musical expression.

Major scales should be warm and glorious (but never forced or sharp), whilst Harmonic Minors can be exotically mysterious, with their Melodic Minor siblings verging towards something more mellifluously melancholic (but never downright miserable).

So, if you are one of those people who has struggled with everything scales related, please enter the Simply Flute Scales System pages, which may well take you into what might end up being an enticingly new and radically different experience!

If you haven’t yet, you can purchase a subscription for as little as £4.99 per month or £45 per year here! 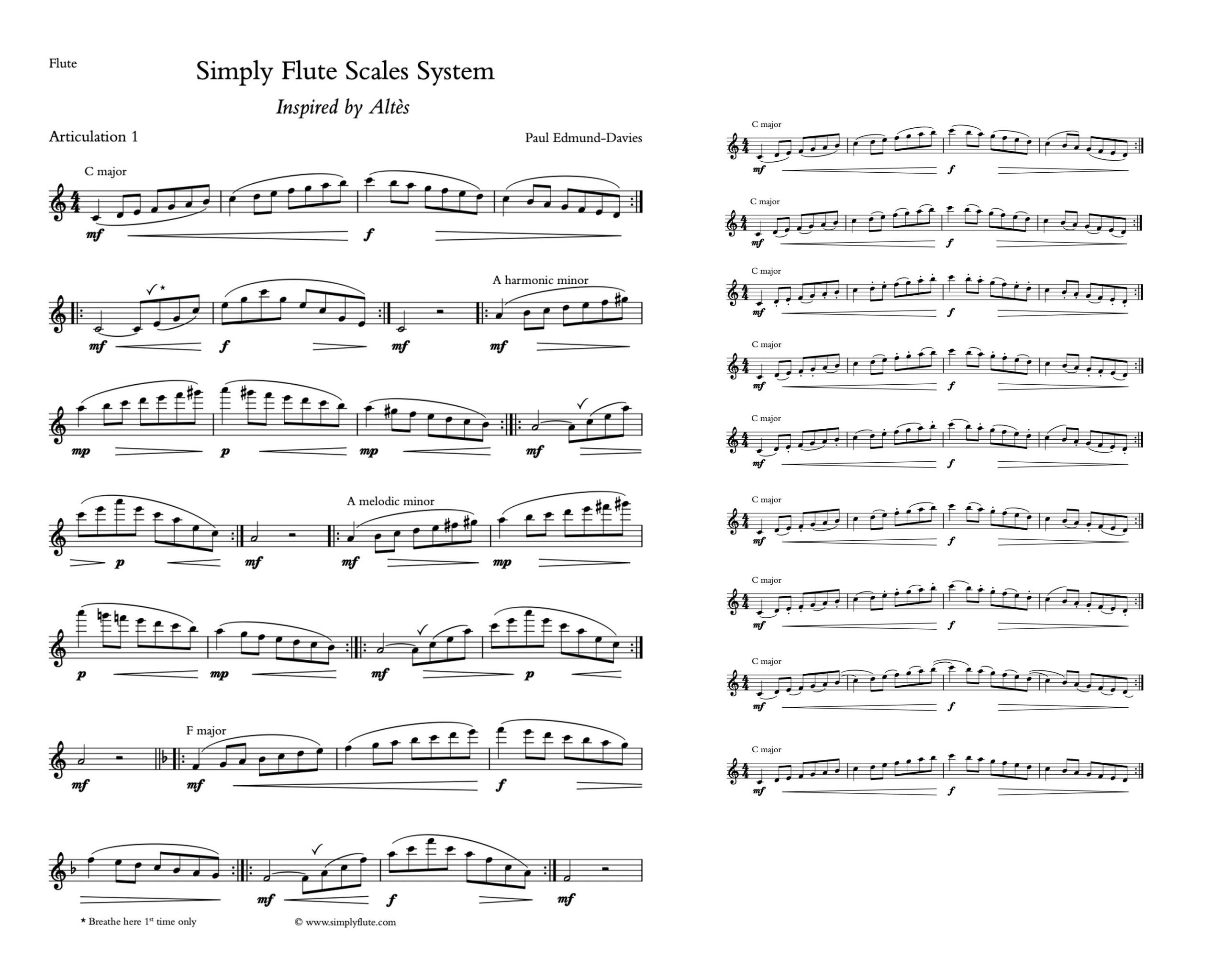 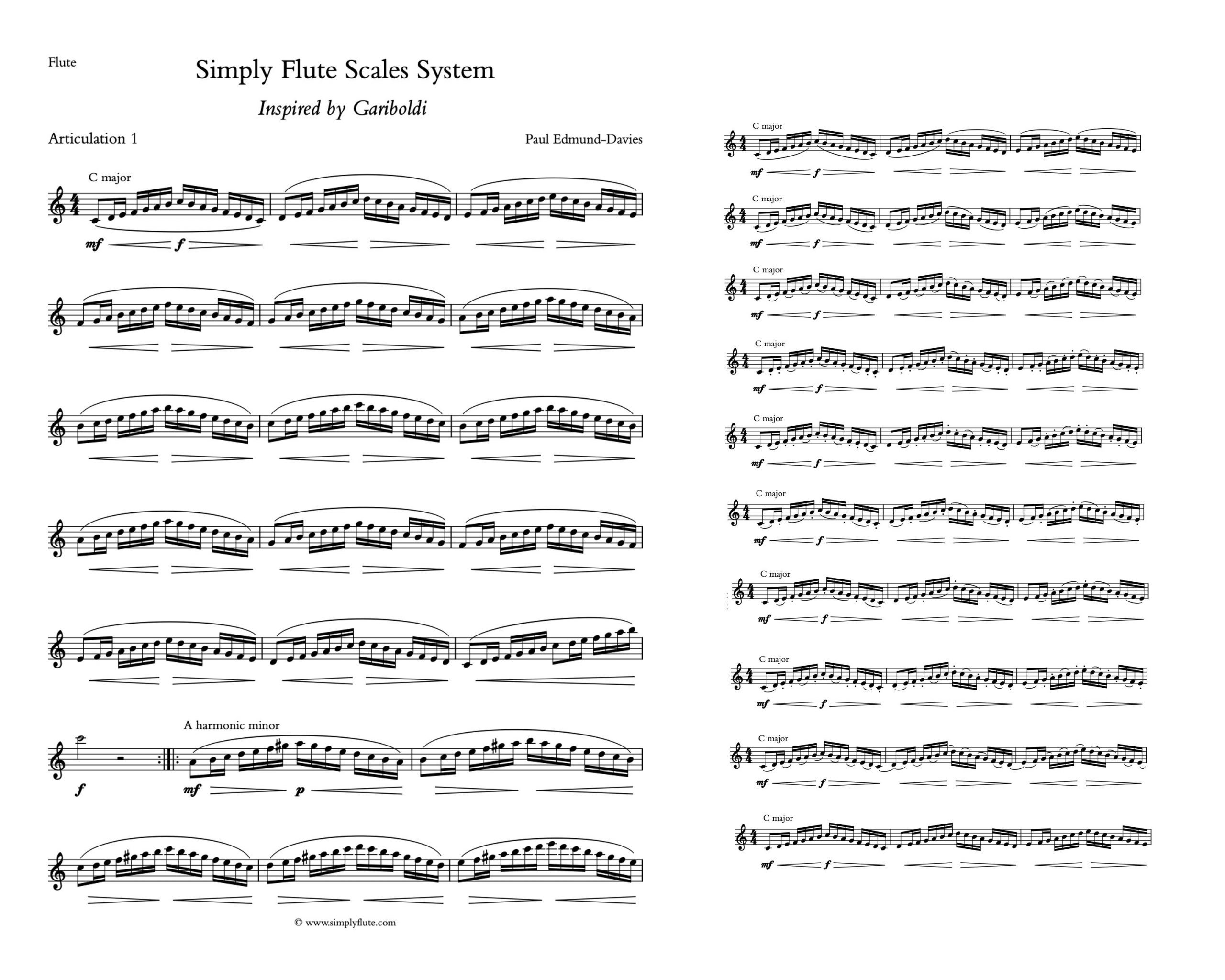 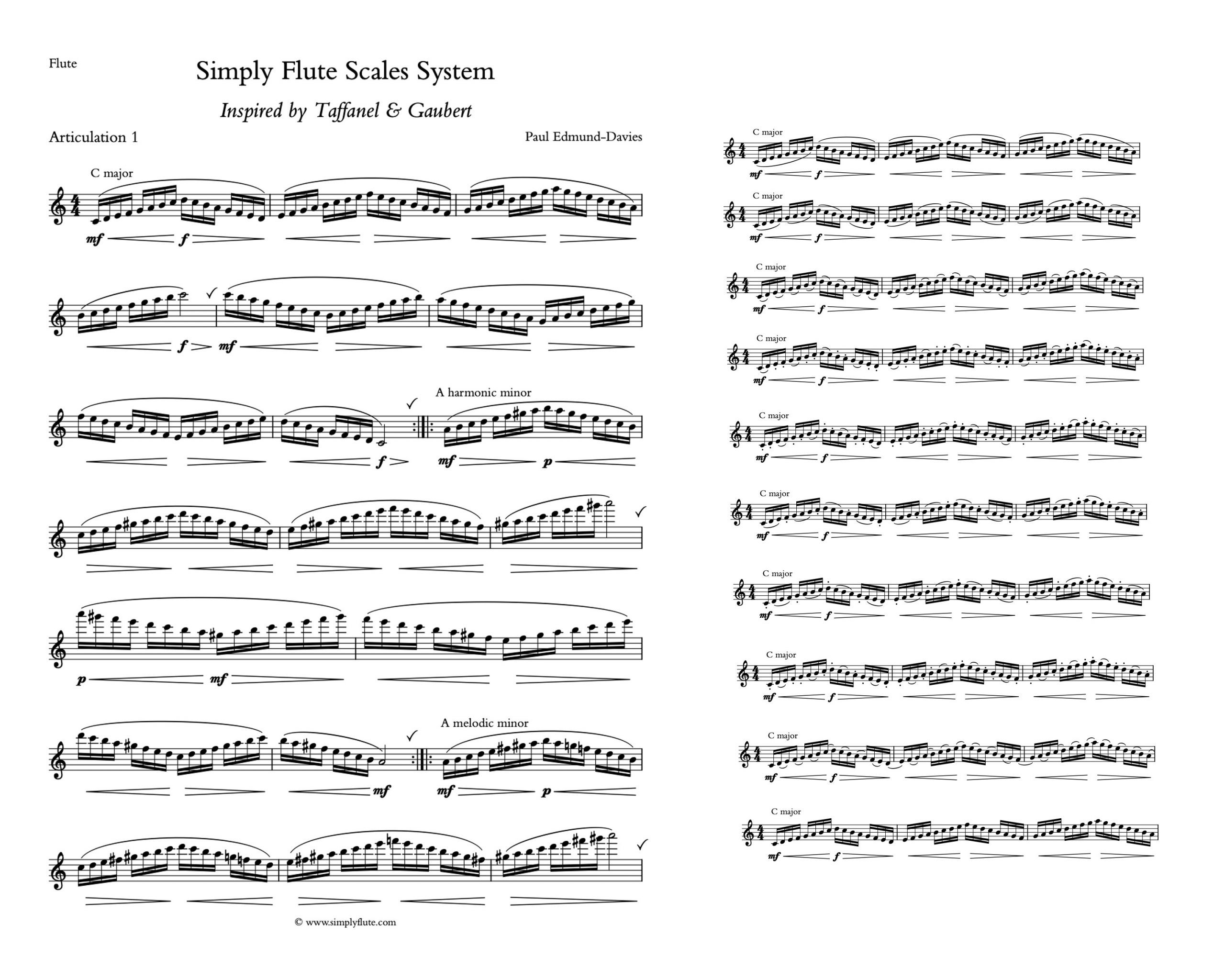 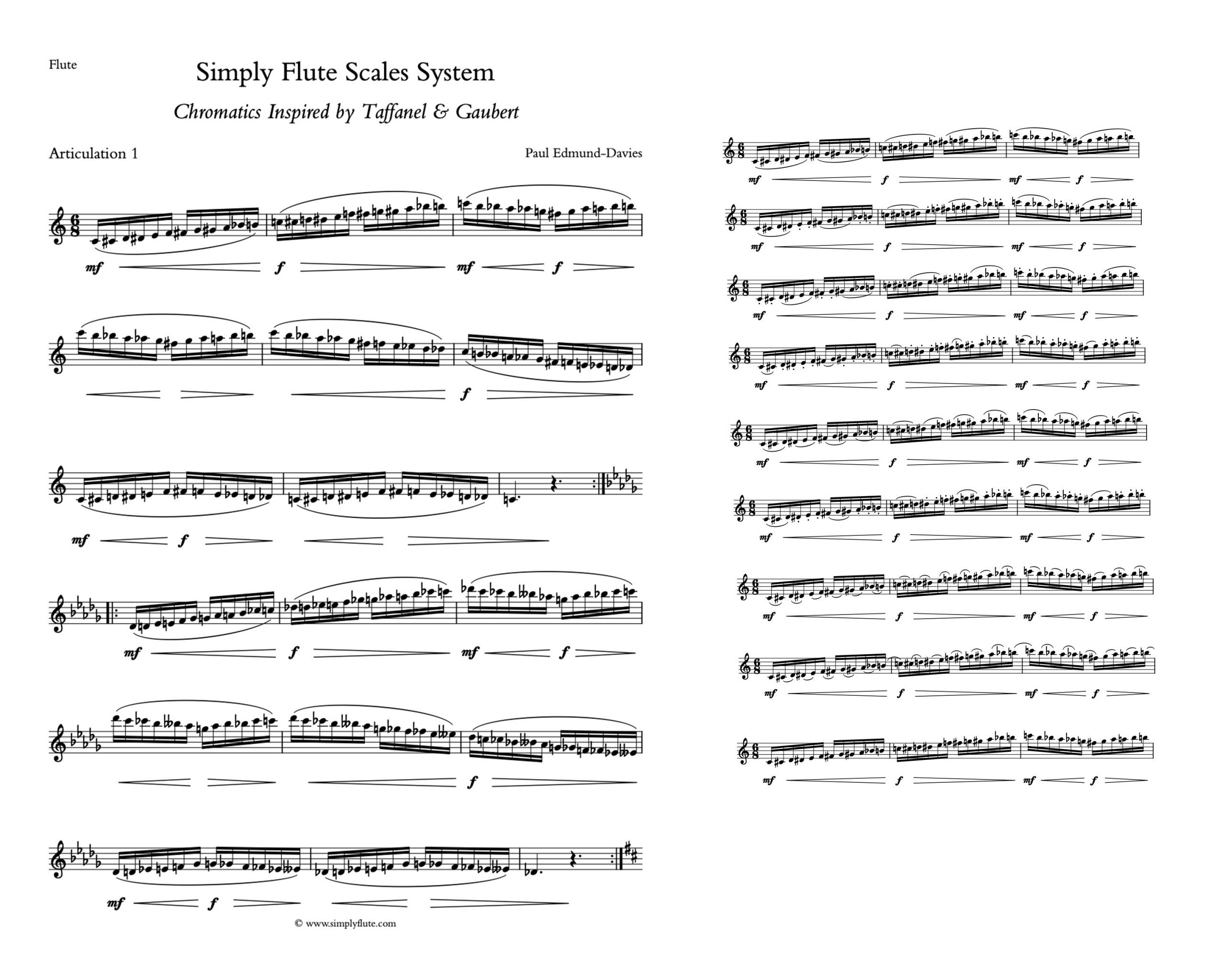