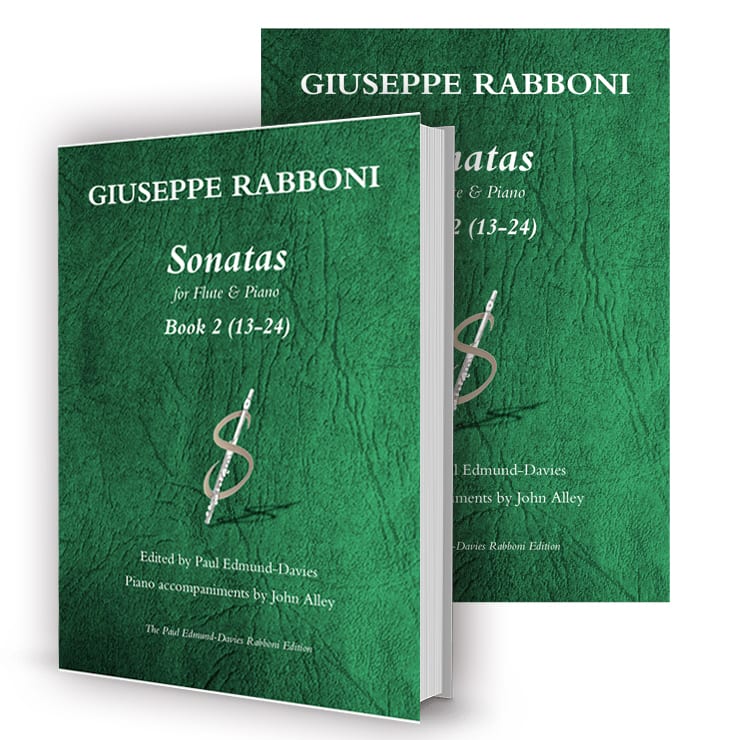 Buy Rabboni Sonatas Book 2 physical book and receive 50% off the pdf download price, when purchased together.

Many years ago, in a second-hand shop in Hungerford (UK), I discovered a tattered old book containing much of the flute music of Giuseppe Rabboni and was immediately fascinated as to why this music was no longer readily available. It transpired that his original publishers (Lucca Press) were taken over by Ricordi. After a major fire at their main warehouse in Milan in the second world war, a vast quantity of music was destroyed, including some works by Rabboni. These Sonate are delightful musical  ‘postcards’ reflecting the glorious world of Opera that existed in Italy, throughout the 19th Century.

In the original book, there are forty two one movement Rabboni Sonatas, aimed at exploring sonority and developing technique. He was clearly a great admirer of the human voice and its similarities with sound production of the flute. These sonatas certainly encourage the performer to approach the task in hand in a vocal manner.

However, it transpires that Rabboni also had magpie tendencies, as many of these pieces are arrangements of the music of other composers (an example being No. 13, which is in fact taken from a sketch of the slow movement of an oboe sonata by Donizetti, but rewritten up a fourth!). I have yet to find any of the original piano accompaniments.

A physical copy will be sent to your address.


Download a PDF copy and start playing straight away