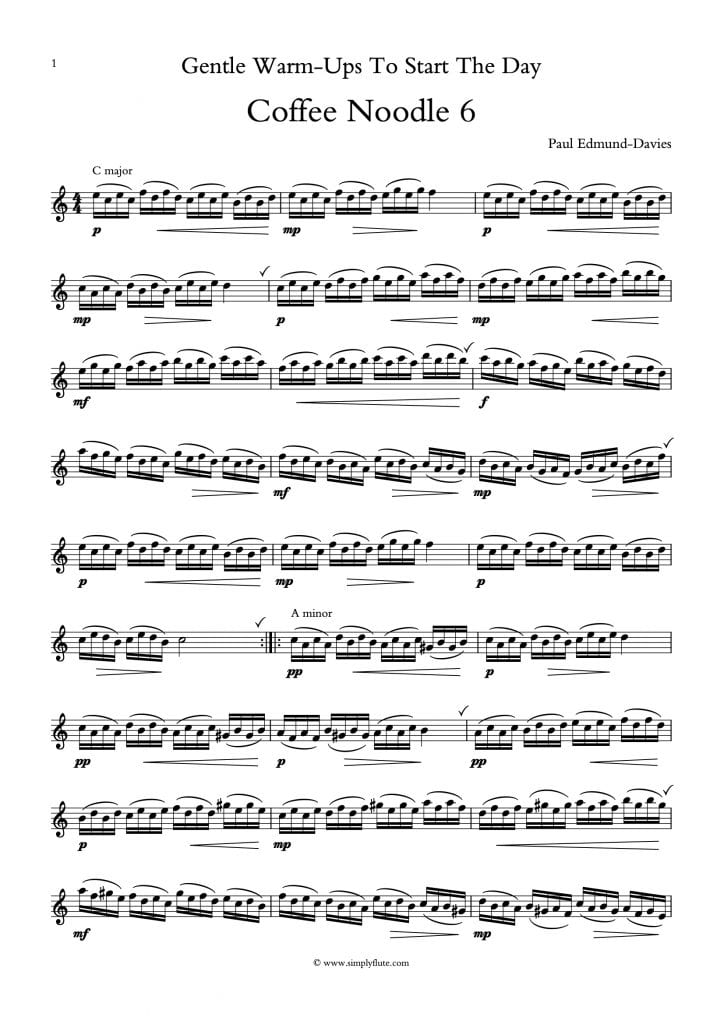 In Coffee Noodle 6, I have broken scales in thirds down into smaller segments, in order to give ourselves a chance to focus on the more finger challenging and downright awkward areas of technique.

I have also made life just that little bit more uncomfortable, by changing direction mid bar.

This should be of benefit to anyone suffering from ‘automatic pilot syndrome’ where sustained concentration and focus are an issue.

As a student, playing scales in thirds was so closely associated with passing technical exams that there was little in the way of pleasure to be extracted from working on them. To pass those exams, all scales needed to be played flawlessly from the bottom of the instrument to the top and back down again.

Due to the duress of the occasion, with emphasis on finger co-ordination and absolute accuracy, they were never musically motivating or indeed gratifying to work on. Trouble was always just around the corner in the top octave too, where fingerings are very different and infinitely more complicated than those to be found in the two octaves beneath.

Panic invariably played a part in the process, thus bringing about unnecessary tensions that were bound to ruin any chances of success.

In Coffee Noodle 6, rather than saying a prayer and hoping for a positive outcome, I have broken scales in thirds down into more manageable segments, giving us a chance to focus in a less frantic or anxious way on the areas, where fingers might need a degree of extra time to adjust to the various demands placed upon them.

If guided sympathetically, they really will begin to understand what it is we are demanding of them. Bully them though and they will rapidly turn into clams!

Once muscle memory has been established, then that is the moment to steadily quicken the tempo.

It will also be beneficial in the long run, if you can ensure that your little finger (pinkie) right hand is operated correctly, when using the D sharp key for C2 and E2.