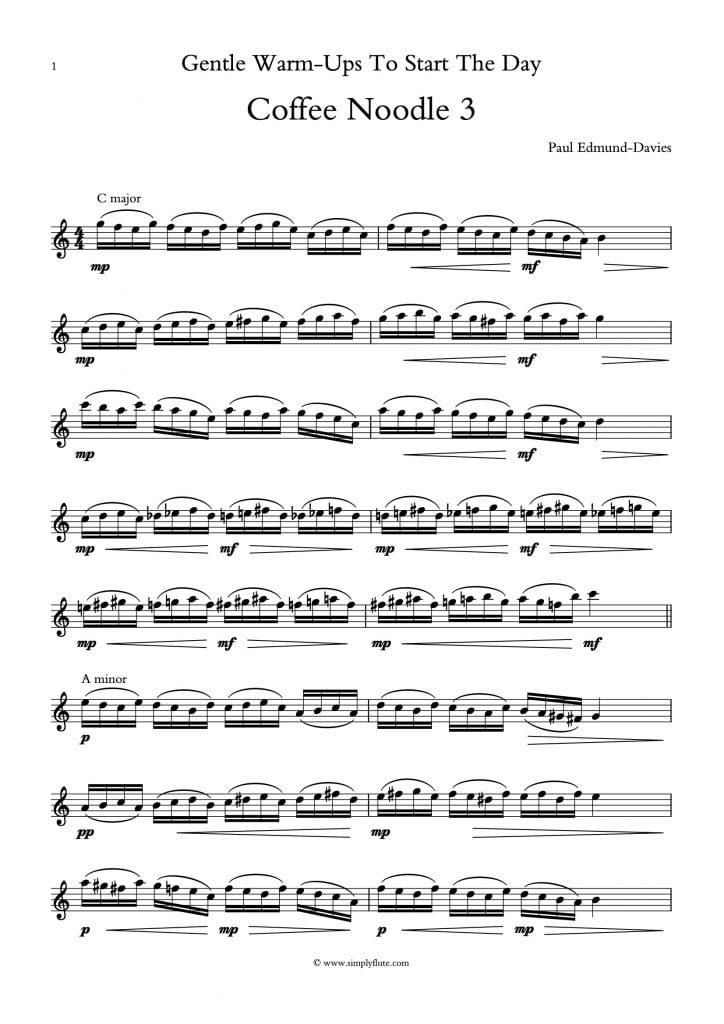 Gentle Warm-ups To Start The Day, Coffee Noodle 3, might also just be what you need to get back into tip top flute form.

As the name implies, Coffee Noodle 3 is another gentle exercise to gradually and musically nurse and coax (the use of calm but persistent persuasion!) our way back into good air, lip and finger control.

It might also just be what you need to get back into tip top flute form after a few days away from the instrument. We are ever so occasionally allowed a break!

To be played slowly at the start, so that note patterns can be both understood and memorised, Coffee Noodle 3 covers all major and minor keys. At 17 pages long, this particular exercise can be a truly ‘epic’ warm up to start your day with.

For the first three lines in each key, apart from playing evenly and with a consummate legato, there is nothing too life threatening to grapple with in Coffee Noodle 3.

It is the musical equivalent of cycling along a rather pretty British country lane on a hot, still summer day, with little in the world to care or worry about!

However, if the whole exercise was in this mould, then your mind might ever so slightly wander off-track or switch off, which would be something akin to a tragedy.

Therefore, in the 4th and 5th staves of each key, some unsettling thunder clouds suddenly appear and I have given you four bars of brain and finger challenges!

Shifting up or down a half step (semitone) every beat will initially feel like crashing the gears in a manual transmission (stick shift) car and in very much the same way, blind panic and disaster may well follow! Initially, you can expect your fingers not to be over enthusiastic. In a state of mild shock, the proverbial cat will have been set among the pigeons.

In reality, all that is happening is that the same four notes are shifting up and down. If you can remember to think about which key each beat is going to next, life will be sweet and simple. However, a high level of concentration will be required.

In both major and minor keys, this pattern is simply the first three notes of each key, starting on the tonic and returning to the tonic again on the 4th note. Voila!

As mentioned above, to start with, play Coffee Noodle 3 slowly and in keys that you like.

Try to avoid going quickly through the first three lines and then hitting the barriers in the 4th.

Ideally, the sequence/exercise in each key should be learnt from memory and then the whole Noodle (in all keys) played in the same way.